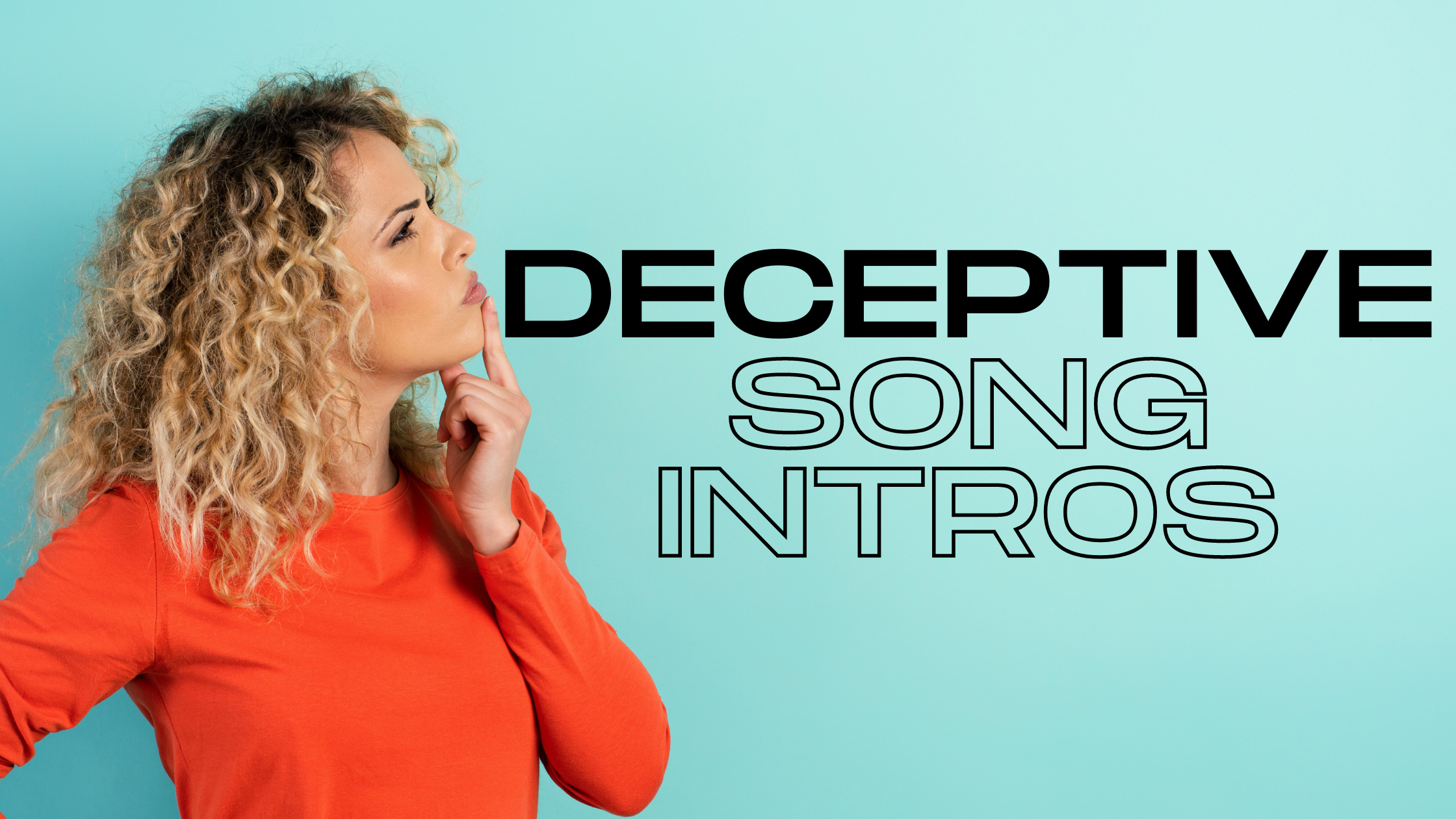 You ever hear a song that starts with maybe one instrument playing, and then when you hear the full band or groove kick in you realize the beat is in an entirely different zip code than you thought?

That's what we're calling, for our purposes, a deceptive intro--an intro that, innocuously or purposefully throws your brain a curveball as to where the downbeat of a measure is.

For the non-musical, a little clarification first: When I say downbeat, I mean the first beat of a measure--the beat that tells you, "This is count one" of however many beats are in that measure (I think all our examples today are in 4/4 time, so they all have 4 beats, or pulses you can feel, per measure.

Let's start with one everybody knows. This song couldn't start more simply. The acoustic guitar is giving us all the rhythmic information we need, with a pattern we can all recognize, right? Nah. That first strum, rather than being the downbeat, is actually coming just before the downbeat--an 8th note before, if you're transcribing--which can make the entrance of the drums in a few measures feel like it's landing in the wrong place.

The syncopated rhythm lands on the "and" of 4, if you count it 1-and-2-and-3-and-4-AND." But you're not given the benefit of a count-in, so the syncopation hits first and challenges your rhythmic ear.

Another classic, and a drum intro that can be truly frustrating. Honestly, most of the time I just wait for the guitars to come in because I don't want to break my brain trying to find the downbeat from John Bonham.

But for the sake of knowing, the first drum hit of the snare and hi-hat come on the "and" of count 3, and the next snare hit is on count 1. So if you mentally count 1-2-3 then start the track, you'll have a much easier time finding the beat, even as Bonzo throws it around a couple bars later.

This one is probably my personal favorite, and I believe we dug into it a little on our "Long December" episode. In this case, the musical intro is pretty non-specific, unless you do some reverse engineering after you know where the beat is. The guitar and bass kind of meander around a bit until the drums say, "Ok, we're starting this thing now." And what we end up with here is really a full verse of deception.

Get this concept now, because it's gonna be important later: In Western music, when the kick drum and the crash cymbals hit at the same time, our brains are hard-wired to interpret that moment as the downbeat, or the first beat of a measure, especially when we hear it in a prominent spot or as the first big hit of a song.

So when it happens here not on the downbeat, it can throw you off course for the full length of the verse, until the chorus sets things right. (The accents here are on the "and" of 1, if you're counting 8th notes: 1-and-2-and-3-and-4-and.)

"Lonely Boy" is an interesting one, because that opening piano riff could make sense in about 3 or 4 different places in a measure of 4/4 time. So the key to finding the downbeat on this one is to trust the first kick drum and cowbell groove. They’re giving you the beat, and the downbeat. Once everything kicks in a little more the bass drum switches to accenting the riff, but if you trust that the first kick is the downbeat, you’ll be fine.

Spirits in the Material World (The Police)

“Spirits” can be hard to pick up on, because all the rhythmic hits are syncopated off the beat, and the kick drum hits are on 2 and 4 in a reggae style, which can be hard to overcome for the ears of non-islanders. And even the melody is not much help, because it doesn't super give away where the beat is.

Interestingly enough, this discussion started as a DM from listener Mark Edward that stemmed from our coverage of Van Halen's "Right Now" back in Season 2. "Right now is another fantastically deceptive intro, and Van Halen have several songs that could be included here, "Feelin'" from the Balance album being another great one.

But this one--this one here made me bleed.

I have to say, though I've learned to pick up on where the groove is at the beginning, I've never been able to do it from the beginning until I sat and made myself figure it out today. Counting on fingers, counting backwards, just wild guesses--all of it was in play, but I finally unlocked it.

This is another case of your brain going "That's the downbeat, I'm sure of it and I'll never let it go," when you hear the kick and crash together, followed by what seems like a very obvious drum pattern. Only the downbeat wasn't where you thought it was, and Alex Van Halen, cruelly misplaced that kick-crash combo there on purpose to deceive you.

And this one has an extra twist that makes it even more difficult to perceive. When the intro fully kicks in with the whole band, the big crash that plays then isn't on the downbeat either. [Insert the angry emoji of your choice here, even if it's the finger.]

So here is the breakdown, if you want to sit with it and force your brain to understand:

Knowing this will also make the initial guitar part, which could easily sound syncopated itself, land on the downbeat, which will help you realize that yes, in fact, the big hit for the full band lands on the "E" of count 1--what the flip is that??

The opening riff to the Cars film and soundtrack is actually not deceptive, but it certainly feels like it's trying to deceive you. And it bears a striking resemblance to the opening riff of listener-suggested "I'm Free," by The Who, which starts on the "and" of 4. In fact, if you listen to "I'm Free" first, it's almost a guarantee that the intro of "Real Gone" will play with your head.

Love to hear some more deceptive intros from you guys--maybe we'll do a Round 2!